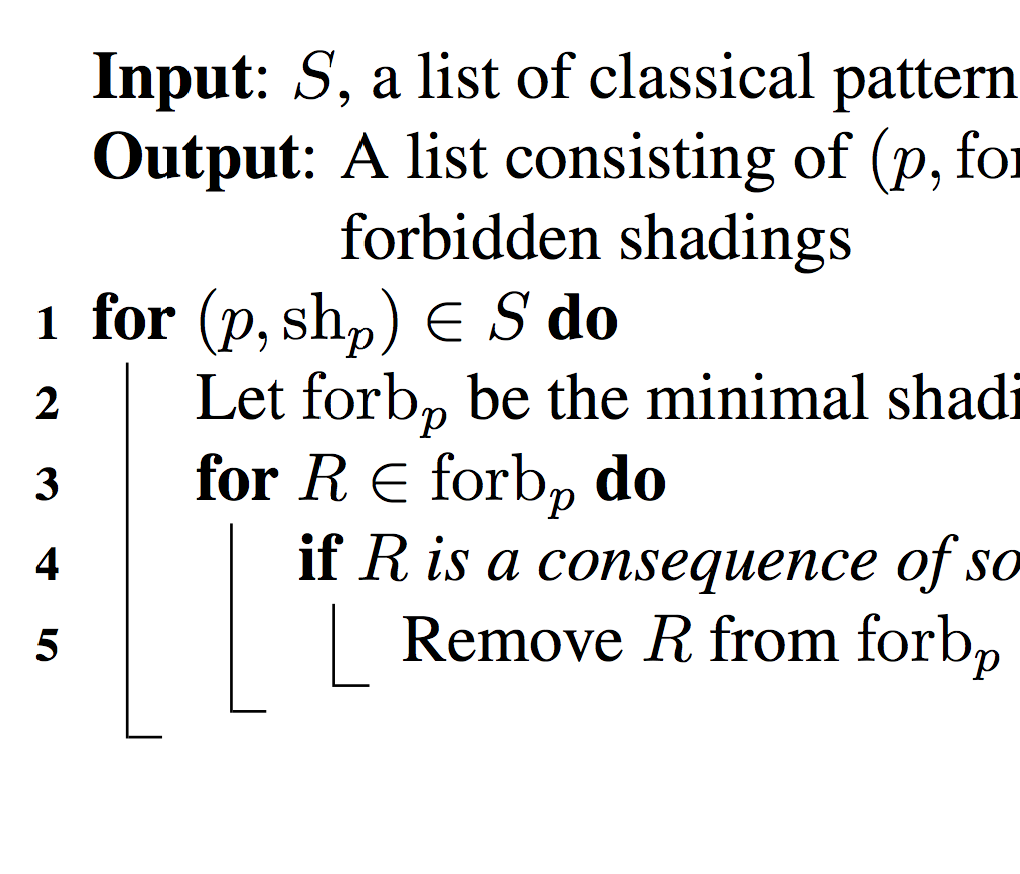 BiSC is an algorithm inspired by a question asked by Sara Billey in the talk Consequences of the Lakshmibai-Sandhya Theorem at the AWM Anniversary Conference in 2011. She asked whether one could write an algorithm for “learning marked mesh patterns”. The BiSC algorithm answers this question for mesh patterns. The name of the algorithm comes from the last name of Sara Billey, as well as the last names of Einar Steingrímsson and Anders Claesson who where also influential in the development of the algorithm.

Below you can download an implementation of BiSC in the computer algebra system Sage. What follows are instructions for using the algorithm. Please contact me via email if you find any bugs, want any clarifications or to suggest new features.

The instructions below assume you have Sage on your machine and have downloaded the archive bisc.zip and unzipped it in you home directory. Start Sage and upload the notebook BiSC_load_example.sws. The first cell in the notebook will load files containing the algorithm, helper functions and examples. The contents of the next cell should be

Here we have chosen an example from Group 0, which contains examples of permutations that avoid a set of mesh patterns. Example nr. 2 will create the set of permutations avoiding the mesh patterns (12,{(0,0),(1,1),(2,2)}) and (12,{(0,2),(1,1),(2,0)}). We have chosen to create the permutations avoiding these two patterns up to length 8 (by setting largest_good_perms = 8). These are stored in the dictionary A. We also put the complement of these permutations up to length 8 (by setting (largest_bad_perms = 8) in the dictionary B. It is our goal below to “rediscover” these two patterns, just by looking at the permutations in the dictionaries A and B. Notice that you can also set the number of cpus Sage will try to use to do this. Set cpus = 0 if you want Sage to figure out the number of cpus on your system.

Now we run the first part of BiSC, where we mine for allowed patterns in the permutations from the dictionary A. Since we know that the permutations in A are the avoiders of two patterns of length 2, we set M = 2.

mine should find 11 allowed patterns of length 2. The next step is to run forb where we will hopefully generate the two patterns that we are looking for.

Somewhat disappointingly we get four, instead of two, mesh patterns. Running the code in the next cell will display the patterns.

We will deal with this a little further down. Right now we can console ourselves with the fact that these four patterns correctly describe the permutations in the dictionary B.

This should tell you that it goes through permutations of lengths 1…8 without reporting any trouble. Now we come to the part where we get rid of the unnecessary patterns.

Here we set bm = 5 to use the permutations of length 1…5 from the dictionary B. We limit the size of bases we are interested in by setting limit_monitors = 2. As we had hoped we get a single base consisting of the two mesh patterns we were looking for.

To be on the safe side, the last cell can be run to check whether these two mesh patterns correctly describe the permutations from the dictionary B.

To see more examples you have two choices: 1) Look inside the file examples.sage. At the beginning of the file there are comments describing what other examples you can load in the same way as we did above. 2) Open the Sage notebook BiSC_create_own_perms.sws where you can define your own dictionaries to run BiSC on.